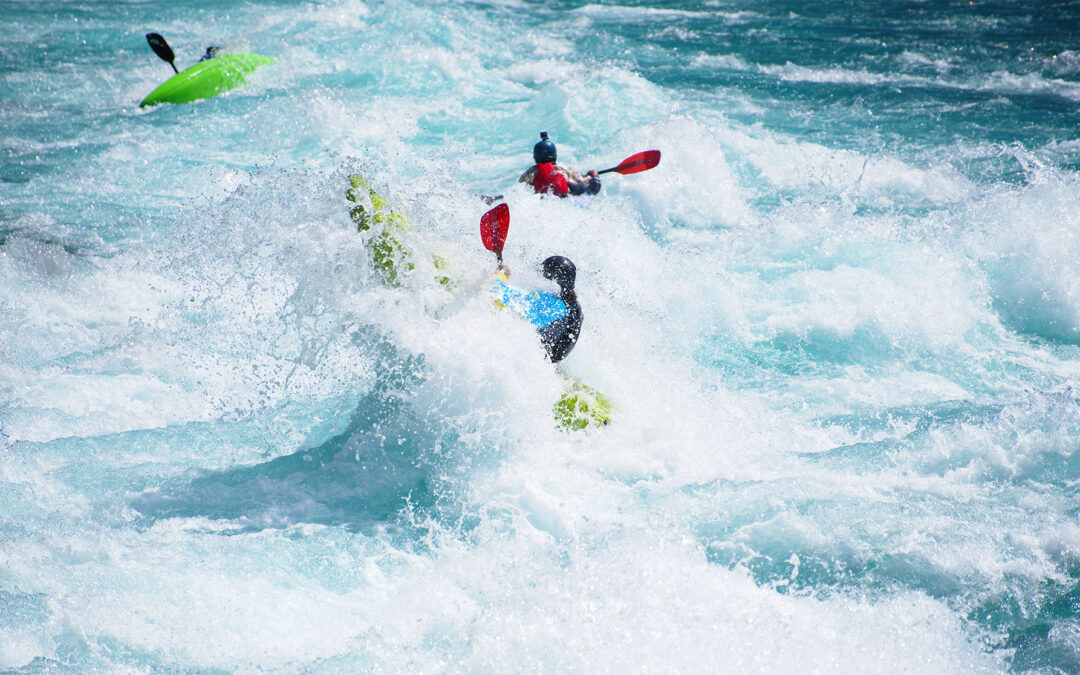 The best time to whitewater kayak Chile is a combination of geography, time of season, and your personal whitewater kayak skills: A) Chilean climate determines water levels for varying skills. Generally, early spring season provides a short season for northern rivers, and high flows for southern rivers. B) Chilean geography north (warmer/arid) to south (cooler/rainier) determines levels in conjunction with time of year. Chile being south of the equator the seasons are opposite to North Americans and Europeans. As you travel north it is hotter and more arid. To the south is more water and the climate is colder. We tend to recommend northern rivers prior to Christmas and southern rivers post holidays. With the Pucon whitewater epicenter having options all year.

You could distinguish Chile kayaking into three regions: northern Santiago to Nuble, Pucon Rivers and Lakes District, and south of Gulfo de Ancud/Chaiten where the world famous Rio Futaleufu is located.

This region is known for Chile’s Central vineyard wine producing arid district. The rivers here flow at optimal levels prior to Christmas. Most notably the Rio Claro aka Seven Teacups National Park is predictably dry or dangerously low by the end of November. Higher volume Rivers Nuble, Maipo, Tena, and Maule hold water for longer and they too are most optimal by the end of November. The weather can be sunny and shorts during the days, and cool at nights. Plan with rain gear and jacket in the case you catch a classic Chilean weather front.

Whitewater Kayaking Chile – Rio Claro Plus Nuble, III+ to IV+ (NOV)- Arguably, the world’s best waterfall wonderland the Seven Teacups National Park has over 75 clean waterfalls within five basalt canyons. Recently, the pros continue to open up new canyons more extreme than we are willing to mule into. This is as good as kayaking waterfalls gets.

Pucon Chile for decades has been touted as one of the world’s greatest whitewater kayak destinations. A variety of rivers and waterfalls are guaranteed year round. We recommend expert kayakers seeking waterfalls and first descents arrive November and earlier. Advanced kayakers will find enjoyable rivers and waterfalls from November to March. We recommend beginners and intermediates kayak the Pucon Chile rivers during January to Febraury to take advantage of sunny weather and managable river levels.

Kayaking Chile Week of Rivers, All Skills (DEC DATES) – As the holiday season approaches so does sunny weather. Rivers to the north are dropping while Pucon’s whitewater mecca guarantees flows and waterfalls. The Kayak Chile Week of Rivers offers whitewater kayak trips for all skill levels from beginner to intermediate to advanced kayakers.

This period of time the northern Chile rivers are getting on the marginally low side. Whitewater kayakers follow the water to the Pucon and Futaleufu regions and surrounding drainages. Pucon has the most diverse variety of beginner, intermediate, advanced and expert kayaking in Chile. While, the Futaleufu is singularly argued by many as the world’s best whitewater river. Keep in mind the Futa is optimal from JAN to FEB, with shoulder months November and December often being gravely high.

Pucon Chile, located on the flanks of the Andes within a temperate rainforest where rivers flow based on both rain and snowmelt to the nearby Pacific Ocean. Imagine placing a string of volcanos which multiply the number of drainages, canyons, rivers, and waterfalls. Volcanos, glaciers and tectonic events also formed numerous lakes. It’s an anomaly with whitewater recreation for all levels from family to expert, and fisherman to rafter.

Know when is best for your kayak skills to kayak Chile

October to November Chile Kayaking. The late spring season Chile’s rivers are flowing with lots of waterfall and river options.

December to March Chile Kayaking. These are the core summer months of the Chile kayak season offering everything including beginner, intermediate, and advanced kayaking adventures. The sun is shining, its warm with long days and the rivers are inviting kayakers. The northern rivers tend to dry up and kayakers migrate to Pucon for the many options and adventures. Pucon Kayak Retreat offers kayak trips based on skill levels.

Anyone who has ever dreamt to whitewater kayaking Chile Rio Futaleufu will enjoy the Road to Futa road trip of a life time. The road to Futaleufu not only embraces the challenge of just getting to Patagonia’s world famous Futaleufu River we highlight every kayaker’s mission to get to the remote Futa Valley. PKH arranges logistics via Chile’s famous Carretera Austral, Southern Highway, taking kayakers along a series of ferries, fjords, volcanoes, glaciers, and Patagonia magnificent en route to the Futa. Once there kayakers fall in love with one of the world’s most magical rivers. Ultimately, kayaking the Futaleufu is every kayaker’s dream come true.

As you travel north to south you go from the warmer arid regions to the cooler temperate rainforest regions. Keeping these facts in mind, the ideal kayak adventure can be planned allowing you to hit rivers at their optimum flows with optimum weather conditions. And in Chile, water levels make all the difference. Basically, you’ll be moving from north to south OR from south to north — depending on what time of year you plan to travel (more on that in a second).

Santiago lies at the northern end of Chile’s central valley and wine district. There is notable whitewater to the west of Santiago, in the Maipo Valley, but 99% of Chile’s whitewater remains to the south. The Andes spine has annual snowmelt flowing west to the Pacific. Traveling south from Santiago looking east to the Andes it’s hard not to imagine what rapids lie hidden upstream.  As you travel south, the weather cools and moisture increases, meaning the snow pack lasts longer into the season. Pucón has one of the longest whitewater seasons in Chile, with quality rivers running year-round.

Chile Kayaker Tip: Pre-December you’ll find the rivers in Pucón and anywhere to the north offer warmer climates and plenty of water in smaller creeks and classic, larger volume rivers. River flow becomes less and less reliable throughout December, with many tributaries running dry by new year. Guides from the Futaleufu and surrounding area travel north to Pucón, and even the central valley, during this time of year. We recommend the Maipo, Seven Teacups National Park, Nuble, and Achibueno Valleys.

Geographically, Pucón is the epicenter of Chile whitewater kayaking. It lies to the south of Santiago and just north of the famous Rio Futaleufu. The summer vacation destination was originally established as a military trading route to Argentina, making it extremely accessible. Pucón is close to the Pan American highway (Ruta 5) and near a major Argentinian border. During early development the town — surrounded by lakes, rivers, and volcanoes — developed as an elite head-of-state fishermen’s destination. The perfect location with breathtaking beauty makes Pucón one of Chile’s top summer vacation destinations – for locals and foreigners.

For kayaker’s, Pucón is Heaven on Earth. Tourism, infrastructure,  highways, and roads to river put-ins and take-outs provide something many other countries simply cannot deliver — access. The high annual precipitation and gradient between the Andes and the Pacific make this region one of the most congested whitewater locations on the planet. Now, imagine the Andes slopes speckled with volcanoes, each with their own glacial drainage. Chile’s volcanoes were formed separate from the mountain range, during different geological events — and they exponentially multiply the number of waterfalls and runnable rivers. In Pucón, for example, the Rios Turbio, Palguin, Truful Truful, and Llancahue are all volcano drainages. Surrounded by more rivers than you can possibly paddle in an area that also offers convenience, night-life, grocery stores, infrastructure, medical facilities, restaurants & cafes, and the opportunity to socialize with other travelers or just as easily seclude yourself far off the grid — it’s easy to see why Pucón has become one of the top kayak destinations in the world.

Pucon Chile Kayak Tip – Pucón has one of the longest kayak seasons in Chile. October and November are rainier periods great for notching lots of class IV+ and big drops. Everything is running. December may be the most popular month due to the holidays. The peak months of summer, from January thru March, see many of Chile’s rivers dry up, but Pucón continues to hold flows and attract kayakers. The sun is shining and the rivers are running.

North is hotter. South is cooler. The weather gets almost unbearable near Santiago from January to March. Chile even takes a month-long national summer break to beat the heat. Chileans flock south to the cooler weather and any sources of water in forms of creeks, rivers, lakes, and lagunas. This is one reason why you see so many tourists in the south of Chile during February. As the weather gets hotter the rivers get lower.

The opposite is true of the south. Even Futaleufu guides avoid the Futa during October to December months due to dangerous high flows and extreme cold weather. But as the rivers of the north get low during summer months the Futaleufu Valley offers the perfect summer climate and an unlimited number of river cooling spots. During these months the river is at perfect flow, attracting kayakers from around the globe.

Chile Kayaking Tip – Go with the flow of Chile’s river levels and enjoy the Patagonia summer weather. Plan your Futa trip for the months of January to March. Since many rivers are dry by this time, many kayakers arrive to Pucón seeking to get on reliable runs like the Palguin, Liucura’s play wave, Trancura, San Pedro or Truful Truful.