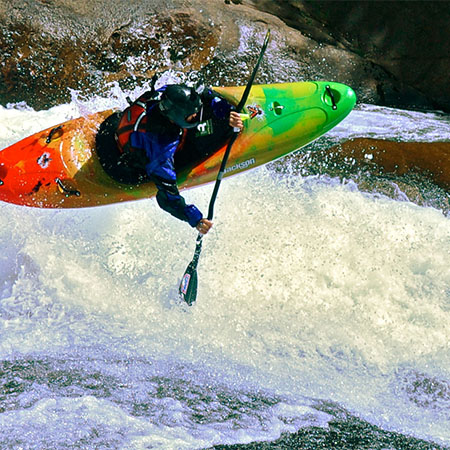 Four days into our Claro +PLUS trip we’re reminded why we first chose to come to Pucon to kayak. It’s the little things that few speak about that we cherish daily in our kayaking lives. Here are a few we identified this week.

#5 – Putting in and taking out at your riverside base.

For kayakers it’s a special feeling to put in just steps away from your bed. Maybe the only thing better is a class IV+ run on the same river taking out at your base to be followed by having a hot tree house shower and a cold beer. Pucon Kayak Hostel’s base is located at the takeout for the Upper Trancura and putin for the Lower (III) section right in the heart of all the local runs.

Few talk about the Upper Palguin putin, but they should. After driving past vistas of Volcan Quetrupillan you’ll next hike into the Palguin Canyon. At the base of the 85’ boof Salto Palguin is a land bridge seal launch. Slide in and the cascades await on South America’s most popular whitewater creek.

Driving east from Pucon toward Argentina is a pristine class III-IV gem known as the Rio Maichin Canyon. Some parts are reminiscent of the Upper Yough with slots and boofs galore. The run does have three runnable V’s with option for sneaks and portages. This river gives you that deep canyon feel… because it’s a deep canyon.

With three volcanoes surrounding Pucon, farmers working the land with ox and cart, and a region known as the rivers and lakes district it’s no wonder Pucon Kayak Hostel maintains a fleet of 4 por 4 trucks for kayakers. Every kayaker knows the anticipation to new river runs and cascades. Your shuttles are grounds for making lifetime friendships.

Pucon Chile has been attracting kayakers to it’s clean river playgrounds for over four decades and for good reason. Kayakers seeking a great winter destination enjoy Pucon’s multitude of cascades and rivers including from class II beginner sections, class III rolling waves and eddies under towering volcanoes, class IV big water and cascades, and even the pros come to test their skills.